In front of the largest home-crowd of the season so far, Moycullen secured a win by the narrowest of margins.

Star had jumped out to a 6-point lead before Moycullen were able to get themselves on the scoresheet. Belfast found success relying on the three-point shot early on, which allowed them to build on their lead. Scores from James Loughnanne and Patrick Lyons kept the home side in touch, but during the final minutes of the first period, Moycullen were unable to convert. After a buzzer beating shot from Star at the end of the first, SSE Airtricity Moycullen were behind by 10 points, 24-14.

The second period was a different story. Moycullen began with a trio of drive-and-scores from Lyons, Loughnanne and Dylan Cunningham. Moycullen’s aggression opened up their offense, and Belfast couldn’t find any answer. Dylan Cunningham attacked the basket at every opportunity, looking to finish, or to set up a teammate. Indeed, on consecutive possessions he was able to find big-man Paul Freeman inside for a layup, before driving and kicking the ball out to Loughnanne for a three-pointer a minute later. After further scores from Freeman and Lawrence-Ricks, the Galway side had completely erased the Belfast lead. James Loughnanne was the standout player for Moycullen in the second, scoring 8 points and taking two charges on the defensive end. A final score from Lawrence-Ricks capped what was probably Moycullen’s best quarter of the season thus far, and one in which they outscored the visitors 22-2. 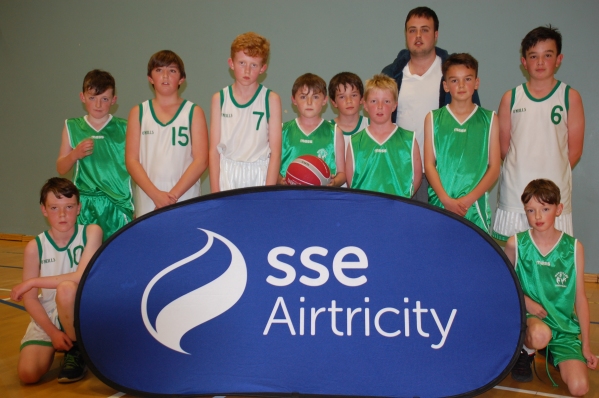 Our U12 Boys who played at half time

The third quarter began in the same vein as the second. Scores from Freeman, Cunningham and Lawrence-Ricks pushed Moycullen further ahead. On the defensive end, Loughnanne and Lyons continued to harass their Belfast counterparts, not allowing their opponents to get into any sort of rhythm.

Eventually though, Belfast Stat managed to break out of their offensive funk. A trio of quick three-pointers from Greg Womack, Keelan Cairns and Conor Johnston cut the Moycullen lead to 8. At that point Belfast caught fire offensively, and it seemed as though they couldn’t miss. Behind this momentum, Star were able to pull themselves level.

However, in the dying moments of the second, Dylan Cunningham knocked down a deep three of his own, giving Moycullen the lead entering the fourth quarter.

In the fourth, The Belfast Star shooting clinic continued- a pull-up three from Keelan Carins leveled the scoring once again. At that point, the game became extremely back and forth: each Moycullen score was followed by a score from Belfast on the opposite end. Neither side was able to build a significant lead as the game reached its final minutes. With 70 seconds remaining, a Cunningham layup had the home side on top by two. On the next possession, Moycullen were unlucky not to force a 24-second violation. After a long offense, Star guard Conor Johnston threw up, and somehow hit, a long three-pointer, giving his side a one-point lead.

On Moycullen’s last offense, Lawrence-Ricks got fouled, and coolly knocked down a pair of free-throws to put his side back up by one with 25 seconds on the clock. Again, Moycullen’s defence forced a long Belfast Star possession. Their final attempt fell short, and Lawrence-Ricks secured the rebound, and the victory for SSE Airtricity Moycullen, as the home crowd erupted.