Moycullen U14 boys win Cork County Board title.Our U14 boys team travelled to Cork on Saturday hoping to repeat their success of last year when they beat Fr Mathews in the Cork County board final in overtime. This time, John Cunningham took the reins and after a shaky start in the first game against Blue Demons when the boys lost a 6 point lead going into the last quarter, they went from strength to strength – each performance stronger than the one previous.  They took the court against Limerick Lions (who had lost their first game against Demons on a 54-51 scoreline),knowing defeat would have them back in Galway in time for Ireland/Australia on the TV and demolished their opponents 19-2 in the first quarter. That lined them up for a 3:00 quarter final against Portlaoise, a team that had beaten them some weeks earlier at Liffey Celtics tournament and played great basketball throughout, winning 58-38. The highlight of this particular game had to be the three pointer from Conor Walsh that had the whole Moycullen bench on their feet applauding.

The team was beginning to settle in to the task and the two starting “fives” complimented each other perfectly with the bench adding further power when asked by Coach Cunningham to come in. 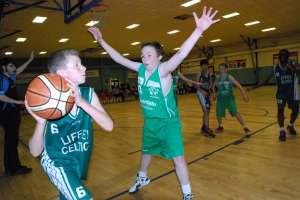 Tommy McNeela in action in the Parochial Hall, Cork.

The semi-final against another Cork power house, Neptune, was going to give the boys a thorough test and an examination of how they would cope with a pressure match in a competitor’s home town with home referees. The team duly rose to the challenge and beat the Cork side 55 to 39. The home team imploded under the pressure exerted over the first half when the Moycullen lads led 32 – 12. Coach Cunningham could sit back and enjoy the basketball as eight of his charges got their name on the scoresheet.

The final against Liffey Celtics was played out before an audience of noisy Dublin & Galway parents as Cork interest had evaporated with the demise of Neptune & a strong Ballincollig team in the other semi. This turned out to be the boys’ best performance of the day – given that it was their fifth of the day – a day which began with a 7am departure from Moycullen, first game at 10:40am & now a final at 6:30 in the evening. Each member of the squad played to their potential – each contributing to the overall team effort in offense and defence. An excellent second quarter gave the team a lead they never relinquished and they played out the last minutes like an experienced NBA team running the clock & knocking in their (four consecutive) free throws for a 50 to 42 win. While the day’s success was attributable to a first & foremost a great team performance, it would be remiss not to mention Paul Kelly’s contribution of 25 points in the final, a remarkable tally for a talented player. 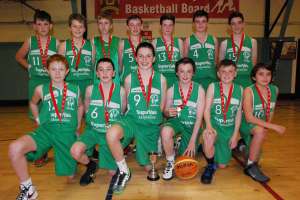 Over the day, John Cunningham did a great job in identifying & counteracting opponent’s strengths while cajoling excellent performances from all the boys. Thanks to the travelling band of supporters who kept the lads supplied with plenty of encouragement & water.

Some more action from the day: