O’Toole Transport delivers once again as they extend sponsorship

We’re delighted to announce that one of our partners, O’Toole Transport have agreed to extend their sponsorship and support of the SuperLeague team for another year. Having become a sponsor for the first time last year, the O’Toole Transport and Moycullen partnership has been a great success and we’re delighted that O’Toole’s are once again onboard as a team sponsor.

A local Moycullen company that is an integral part of the community, they are an ideal partner and perfect fit for our SuperLeague team. 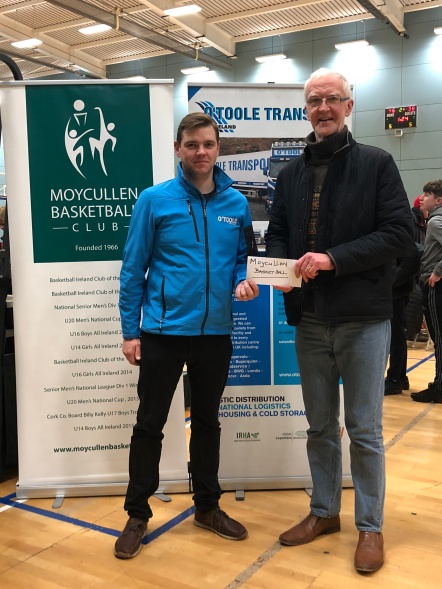 Pictured here is Laurence O’Toole from O’Toole Transport who was at our home game against UCC Blue Demons on Saturday, February 3rd to present our Treasurer Joe Tummon with the sponsorship cheque.

Unlike O’Toole’s we don’t always deliver the goods and our game against Demons, which looked like it was going according to plan for so long, turned out to be one such occasion this year when we didn’t get the result.

Another super game of basketball we hope that the O’Toole Transport team enjoyed the contest.

Many thanks to Laurence, the O’Toole family and everyone in O’Toole Transport for their continued support of the club and the team. Only for great sponsors and partners like O’Toole’s, SuperLeague basketball wouldn’t be possible for the club so we would ask you to please support O’Toole Transport when and where you can.

Like the club and SuperLeague team, O’Toole Transport are a fantastic Moycullen success story. Established in 1996 with one refrigerated vehicle operating from Galway, today they are recognised as the premium, family owned, logistics provider to the food industry servicing domestic and export markets.
The company has grown to become one of the leading food logistics and transport companies in Ireland, specialising in National and International distribution for the FMCG sector, with depots in Galway, Dublin, & Waterford.

O’Toole Transport is a dynamic young company with a modern fleet with in excess of 75 trucks and 100 trailers. The average age of the fleet is 4 years. They have an extensive range of high spec trucks and trailers that includes refrigerated, multi-temperature controlled and ambient trailers that allow us to specialise in the transportation of temperature controlled product.

In 2012 they became the first logistics company in Ireland to be awarded the prestigious BRC Accreditation for the cross docking and distribution of chilled, frozen and ambient foodstuffs.
Specialised services include;

For more information on O’Toole Transport, please visit their website