Moycullen U20 Men face St. Vincents in the semi-final of the National Cup on Sunday afternoon at 1pm in Neptune Stadium, Cork.

Defending champions in any tournament especially a National Cup always have a big target on their backs and after their thrilling campaign and win in last years U20 Cup, the lads have been no different.

Great credit must be given to the team in the way that they have so far successfully met this challenge; a solid display in the first round against North Star of Derry, saw the lads advance to the 2nd round and a home game against one of the favourites for the cup; Kubs.

In what was an enthralling game, Moycullen produced some excellent basketball to build up an 11 point lead at one stage during the 3rd quarter but a quality outfit like Kubs were always going to mount a serious comeback and with 5 minutes to go it was down to a 2 point game. The game entered a crucial stage and with both teams playing some great basketball the result was very much in the balance

Credit to the lads, after being a little sloppy on defence, they stepped up their intensity and where there was once passing lanes & easy dribble penetration for the Dublin team, there was now a Moycullen body denying that path. The offence once again began to get back into rhythm and with some clinical execution on that end of the floor, they were able to weather the storm and started to increase the lead once again. Down the stretch the Kubs offence were unable to find anything easy and when they had to foul to extend the game, the lads knocked down the free-throws to see off the challenge of the Dublin team by 11 points and advance to the quarter-final against neighbours and friends Maree.

Always a tough proposition, Maree on their home court were going to be a tough challenge. But any possibility of a surprise was quickly put to bed with an excellent performance on both ends of the floor in the first half. Leading by 24 points, Moycullen were always in control in the 2nd half and saw out the win by a 28 point margin and see them through to the semi-final stage for the second year in a row

St Vincents, like Moycullen are littered with quality players; James Harding, Conor Gilligan, Graham Brannelly & Martin Neary are all on the Irish U20 squad and have been playing big minutes on their Premier League team. This exposure has stood to them over the course of their U20 campaign, one which has seen the Dublin team register comfortable wins in their outings so far.

Obviously Moycullen will be hoping that Sunday’s encounter will see them end up the right side of the scoreboard. The vast majority of the team have experienced the National Cup semi-final weekend and all that it brings; 11 of this years team were on last years victorious U20 team and 10 were on the U18 team that made it to the U18 semi-final. 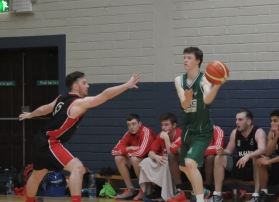 njury Kyle Cunningham, Sean Candon & Joseph Tummon, all of whom are on the Irish U20 squad, are playing outstanding basketball. The experience that the 3 have gained from playing Premier League basketball cannot be underestimated and has proven invaluable to the team during this years U20 games.

Rory Heffernan has grown into his guard responsibilities & with Sean Kelly, Joshua Marvesley, Conor Egan & Jack Costello playing vital roles for the team, it has real strength. With U18’s Eoghan Kelly, John Hackett & Connor Curran also playing the team has good depth at all positions which allows them to play an up-tempo style of basketball with solid defence.

With such quality on display the game is sure to be a thrilling contest and a real threat for both sets of fans. Obviously Moycullen will be hoping that it’s us that advance to the final and try to retain the U20 Cup