The U14 boys had a good win over fellow title contenders Titans in the Jes hall yesterday night on a 60-38 scoreline. While the boys played well, the score in part resulted from Titans front loading their first quarter five after which they led by three. The second quarter scoreline  of 25 – 0 ended the competitive nature of the game. The boys will go to Cork on Saturday to try to defend the title they won last year in dramatic fashion when defeating Fr. Mathews in overtime. 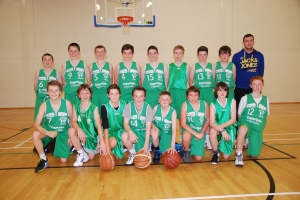 The group stage sees them pitted against Blue Demons & Limerick Lions and with Kubs, Neptune, Fr. Mathews, Liffey Celtics & Titans in the line up, the roadwill be long & hard. Good luck to the lads from all in Moycullen Basketball club!!