Moycullen travelled to Dublin at the weekend to take part in the U18 Ladies National Cup with no great expectations but a desire to pit themselves against the best ladies teams in the country. Weakened by late injuries and matched against Carraig Na BhFear and Meteors in group 3A, the girls were hopeful rather than confident. In a thriller against the girls from Cork on Saturday morning, Moycullen were victorious on a 76 -71 scoreline – both teams sacrificing defence in a great offensive shoot out. Carraig Na bhFear played their part pulling back a 10 point deficit with 90 seconds on the clock – making it a one score game with 5 seconds on the clock. Moycullen closed the game out with two free throws to ease their coach’s heart condition.

Next up were Meteors with six current Irish U18 internationals on their squad  and a significant age & height advantage also. Moycullen without coach Paul O’Brien on the side line – given his commitments to the Premier side in Cork,  found the game a step too far and went under 73 – 45. 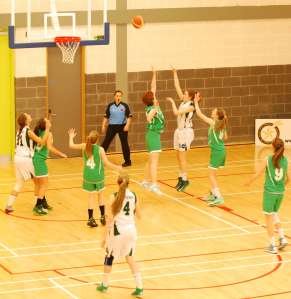 On Sunday morning the girls played Oblate from Dublin (winners of group 3b) in a game to decide who went through to the last 8 of the national cup. With their coach restored to the bench, the girls put in a great performance against a more experienced, older & physical side. They met the challenge head on, and recovered from a 9 point second period deficit to lead at the break. The girls upped the pace in the third holding Oblate to 2 points, while scoring 13 themselves. It was a lead they were never to relinquish and went on to win 55 – 45. Later that afternoon, they played Meteors again to decide which team would have home advantage in the quarter finals – going under again. A major characteristic of this team is their refusal to give up and while outclassed by a serious Meteors team, they took the fight to their much vaunted opponents right to the final buzzer. Catherine Connaire, averaging 27 point per game leads the overall Cup scoring charts for the weekend games and Aine McDonagh also figures in the chart with a points average of 15.2. 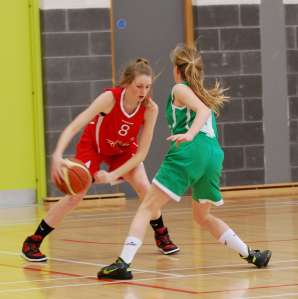 This young team now travel to Cork on the weekend of the 7th/8th of December to play one of the favourites, Glanmire Ladies in the quarter final in the next stage of this adventure.