All eyes will be firmly on the National Basketball Arena at 10am this coming Sunday 27th January when we once again go in search of that elusive U18 National Cup. After a very impressive campaign so far the lads face an excellent Belfast Star team in what promises to be an enthralling contest. In truth it was probably always going to be these two teams in the final once the draw was made and it’s fitting that we get to lock horns with each other for a National Cup after so many great battles at U14, U15, U16 & U17.

The lads have played some quality outfits in their 6 games to date and will be hoping that they can continue with their great form shown so far;

They beat Kubs in the Pool final on Sunday November 4th in Gormanston to ensure a home draw in the quarter final where they would play Ongar Chasers. The lads were in good form all weekend winning all four games….

On Saturday they played Kubs in the first group game. A game of scoring bursts for both teams, the lads built up a lead and were able to see out the win to get a good start to the day.

The second game of the day was against Fr. Mathews and a dominant first half performance was enough to see the team top the group and set up a Pool semi-final game on Sunday morning against Anderstown Tigers.

The 10am tip-off on Sunday morning didn’t bother the lads and they once again had a very good first half which saw them win the game and battle it out for a home quarter-final.

In the Pool final, we once gain faced Kubs who had beaten Gneeveguilla in their semi. While we didn’t get off to the greatest of starts, we soon settled and played some outstanding basketball at times to gain victory and guarantee a home quarter-final draw.

The quarter-final was played at home on Sunday in St. Mary’s when we played Ongar Chasers. A clinical display from the lads ensured that the win was never really in doubt with all 12 playing keys roles in ensuring that they would be in the semi-final against Dublin Lions on Sunday 13th January.

In a game which wasn’t for the faint hearted the lads overcame a resilient Lions team in Cork with all the team contributing in what was a solid and gritty display for the full 40 minutes.

The 1st quarter really was the game in a nutshell; Lions started off brightly but a strong response from the lads had us up 6-2 early in the game. While in control the lads were never really able to build up a substantial lead to be comfortable but by the end of the quarter the lead was 14-11. An even spread of scorers with Aaron, Paul, James Connaire, James Cummins and Daniel all getting on the score sheet. However, one disappointing aspect was James Connaire picking up two early fouls which sent him to the bench.

A better start to the 2nd quarter with Paul doing a good job getting into the heart of the Lions defence to finish some good moves. Some great defensive pressure from Tommy & Iarlaith was forcing Lions into tough shots which we were able to capitalise on with some fast break scores. When we failed to convert, Gerard pulled down some huge offensive rebounds to get us 2nd chance looks. While we were begining to finish well inside our outside shots were still not dropping but the lead was now up to 8 by the end of the half; 34-26.

The start of the 3rd was going to be crucial in determining the outcome of the game, a great start from our lads saw us stretch the lead out to 12 but back came Lions to bring it back to 6. Some great work from Daniel & James Cummins had it back up to 10 and then with some great defensive work it was up 15. However, credit to Lions they came at us with everything to bring the lead back down to single digits but a crucial score from us with 30 seconds to go in the quarter to steady the ship saw us win the quarter by 1 and even with all the momentum swings seemingly going Lions way the advantage was now 9; 51-42.

A great score from Gerard to start the 4th gave us another double digit lead and it felt that we were beginning to get control of the game. However, it seemed that when Paul fouled out with 8:30 to go that the impetus would once again go to Lions. But the very opposite happened; the lads put in a truly outstanding display of basketball to not give the Dublin outfit any easy looks and while we struggled at times on the offensive end we got scores when they were needed. With both teams trading baskets Lions were forced into fouling to stop the clock but with the two James’s & Iarlaith doing a great job from the free-throw line; hitting 10 from 14 attempts, Tommy making life miserable for the Lions guards and Ger mopping up the boards the win was guaranteed in the last few minutes and by the end the of the game the lead had ballooned out to 18; 74-56.

James Connaire was excellent offensively in the 4th quarter scoring 14 points, nailing 8 free throws and getting those all important scores when we really needed them. He was ably assisted by Tommy, Iarlaith, James Cummins and Ger particularly on the defensive end to make sure that the Lions were never going to make enough inroads into the lead.

Overall a superb defensive performance to hold a potent Lions team to only 56 points and while we we were far from free-flowing offensively ourselves we still finished with 74 points.

Dylan’s interview after the game with David Naughton from Basketball Ireland.

Missed the game or want to watch it again. Game Link.

And now to the final where we face a formidable Belfast Star team.

All the club would like to wish the team & coaches the very best of luck and will have their fingers crossed that they can emulate their U20 club mates from 2015 & 2007 who won the U20 National Cup in unforgettable scenes not to mention the Senior team that won the Senior National Cup in 2009. Good luck lads!!!!!!!

Dylan spoke with Galway Bay FM’s John Mulligan on Thursday in the build up to the game.

The club are organising a bus to the game, which costs only €10 per person. Details on the bus and also on how to purchase tickets are in the following link 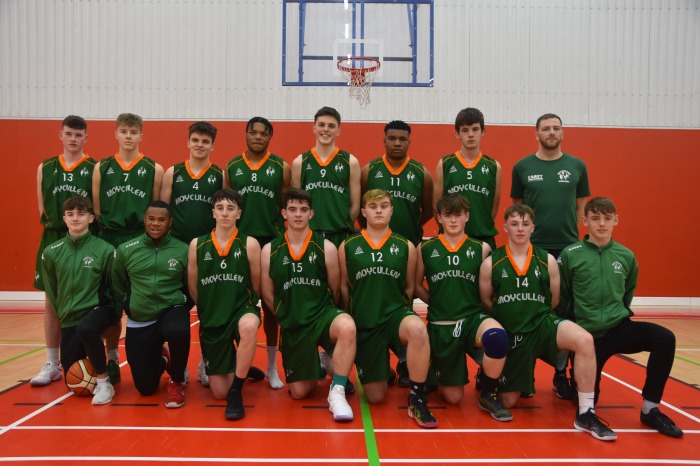