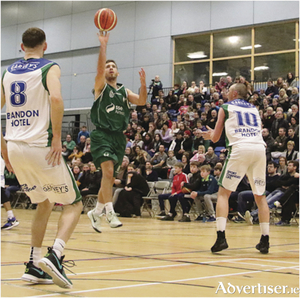 A blistering start was not enough for Moycullen to hold off an experienced UCC Demons side in the latest round of Basketball Ireland Superleague action on Saturday night as they fell 72 to 85.

In what was a crucial game for both teams in the battle for the final playoff spot, it was Moycullen who hit the ground running, connecting on a string of early three pointers to take a 12 to zero lead before Demons found their first score of the contest.

Despite the growing influence of Demons’ American star Lehmon Colbert, Moycullen continued to have the better of proceedings early and finished the first quarter with a 25 to 16 lead.

Through some excellent shooting from James Loughnane and Brandon McGuire, Moycullen kept the scoreboard ticking over nicely in the second period and enjoyed some of their best flowing offence of the season.

Unfortunately, the home side were increasingly finding it difficult to contain a Demons offence that, after a sluggish start, began to find its feet as they game progressed. The improving scoring touch from the visitors meant that Moycullen entered the half with just a seven point lead after having dominated the first twenty minutes of play.

At half time we had two very special events.

First up Laurence O’Toole from O’Toole 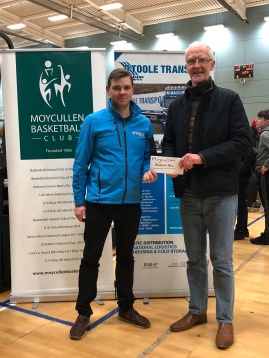 Transport was on hand to present a sponsorship cheque to our Treasurer Joe Tummon.Manny thanks to Laurence and everyone at O’Toole Transport for their continued support.

Our U10 boys were in to play an intra-squad game in front of the big crowd. A super display from the boys and the crowd got right behind them in what turned out to be a great halftime display

When we got back to the action on the court at the start of the 2nd half, Moycullen’s failure to stretch their lead while in the ascendancy proved extremely costly as the shooting form that had seemed so easy in the first half, abandoned the Galweigans in the third quarter.

A measly 12 points in the period saw the men from the west give up their lead and enter the fourth trailing by seven  on a scoreline of 57 to 64.

Worringly for Moycullen head coach John Cunningham, the Demons’ back court combination of Adrian O’Sullivan and Kyle Hosford had come into the game increasingly in the third after quiet first half showings.

The two finished the game with a combined 38 points, much of which came late in the game and their ability to score difficult baskets over tough defence helped the visitors stem any run from Moycullen and a vital road victory for Demons on a scoreline of 72 to 85.

While Moycullen can take a  number of positives from the game, such as the outstanding defence of Dylan Cunningham and the continued shooting excellence of James Loughnane, the loss will be a tough pill to swallow when they look at the league standings and their position just below Demons and out of the playoff picture for the moment. 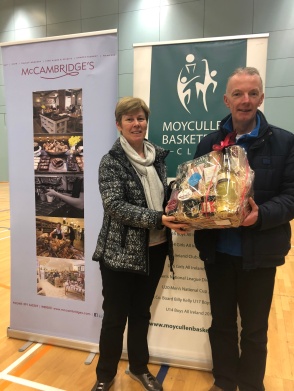 John Clifford with his McCambridge’s hamper

“We needed this game, and having beaten Demons in Cork earlier in the year, we felt like we were the better team and should have won on our home court,” said a dejected Dylan Cunningham after the game.

“We probably didn’t take advantage of our dominance early on. They converted when they had their run and that was the difference.”

Moycullen are on the road next week when they travel to KUBS and have just two home fixtures left in the season, on the 25th of February against Cup champions Templeogue and the 10th of March against league leaders UCD Marian.