Moycullen SuperLeague team with Kiltimagh Giants U11 & U12 Boys

After a narrow loss to away Templeogue the previous week, Moycullen were looking to regain their winning form when they welcomed Belfast Star to the NUI Galway Kingfisher Gym this past Saturday.

Unfortunately, a slow start meant the home side were forced to chase for the entire game, and they never quite recovered from an early deficit.

“We’re disappointed with not getting a positive result,” Moycullen Coach John Cunningham said.

“We’d been on a good run, but we started very flat- Star did their homework on us, and they took us out of our rhythm and the bad start cost us,” he added.

Indeed, in the first quarter the Galway men had problems finding the net.

On the opposite end, Belfast had so such offensive struggles- they connected on on a trio of three-point shots in quick succession. Moycullen eventually found good looks through McGuire and Cian Nihill, but Belfast’s early burst had them ahead at the end of the first.

Once again we had our Nuark 3 Point Challenge between the 1st and 2nd quarter of the game. It’s simple; one 3 Point Shot for €50. This week, Eoin Tierney got the change to win the €50. Without doubt the best effort of the season and it looked good all the way, just veering left at the last moment. Hard luck Eoin, so close!!!!

Entry to the Nuark 3 Point Challenge is free at all our home games; make sure to get your ticket when you enter the gym prior to the game. If you’re not in 10 minutes prior to tip-off, all available tickets may be gone so get in early.

For more details on Nuark & the 3Point Challenge.

The second continued in the same vein. Moycullen had to work extremely hard for every basket; while Star continued to score with relative ease. McGuire and Nihill continued to be Moycullen’s only scoring threats, and each picked up six points in the second. A pair of costly turnovers late on allowed Star to extend their lead to 12 points at halftime.

Moycullen’s play improved substantially in the third. Within the first couple of minutes Moycullen’s defensive intensity was such that they forced a pair of Belfast shot clock violations.

The Connemara men’s offensive play also picked up, with Kyle Cunningham, Paul Freeman, Dylan Cunningham and James Loughnanne each contributing. Loughnanne looked particularly sharp- pouring in 10 points in the third. With the momentum behind them, Moycullen reduced Star’s lead to 5 by the end of the third.

The final quarter was a scrappy affair, and both sides committed a handful of turnovers. Belfast sought to extend their lead through their inside pairing of Clement Kulinicz and Keelin Cairns, but Moycullen prevented them from getting any sort of scoring run together.

After Cairns fouled out of the game, Moycullen attacked the rim at every opportunity. The packed-to-capacity Kingfisher gym (with some very special guests, Kiltimagh Giants U11 & U12 Boys teams) really got behind their team, and after a pair of jumpshots from Nihill and Patrick Lyons, Moycullen found themselves 2 points behind with a minute remaining.

On the ensuing possession, a huge basket from Belfast’s Paddy McGaharan sucked the air out of the gym, and Moycullen were forced to intentionally foul to keep time of the clock. Thereafter, both teams exchanged freethrows, and Belfast held on to their 5-point lead until time expired.

Next week Moycullen face one of their biggest challenges of the season so far, when they travel to Dublin for a clash with Superleague leaders UCD Marian. 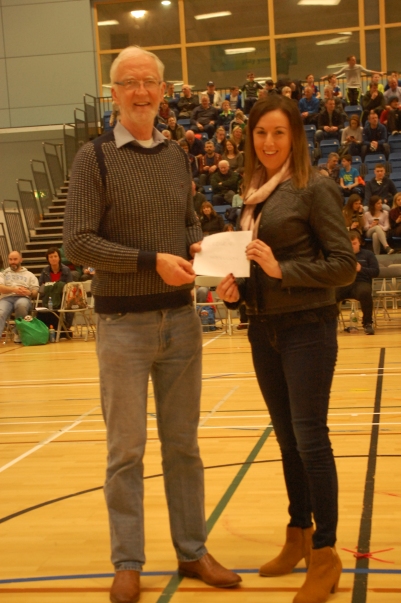 We had a very special presentation at the break between the 3rd & 4th quarters when Bernice Faherty from Aerogen presented a sponsorship cheque to our Treasurer Joe Tummon.

Aerogen came onboard last year for the first time as a sponsor of our SuperLeague team and have very graciously extended their partnership with the team for another year.

Many thanks to Aerogen for their continued support of our team, without the support of such great friends and partners it wouldn’t be possible to have SuperLeague basketball.

The winner of this weeks fantastic hamper courtesy of McCambridges was Hazel Freeman. Hazel is the daughter of our SuperLeague player Paul, so it was great to see Hazel. I’m sure all in the Freeman household will enjoy!!!!

Hazel is pictured here with her big brother Kevin been presented with the hamper by David Naughton from McCambridges of Galway. Many thanks to McCambridges for their continued support of the SuperLeague team.