SSE Airtricity Moycullen overcame Superleague rivals UCC Demons in a thrilling encounter at the NUI Galway kingfisher gym on Saturday 11th February in round 17 of the 2017 Superleague season.

In the first quarter, Moycullen struck first. The Galway men looked to push the break at each opportunity. Philip Lawrence-Ricks and Dylan Cunningham capitalised on a couple of early Demons turnovers, and ran in some layups on the other end. Defensively, Patrick Lyons and James Loughnanne looked sharp, with Lyons picking up three steals. Just as Demons started to edge themselves back into the tie, Loughnanne nailed a pair of three pointers, giving Moycullen a ten-point lead at the end of the first.

If the first quarter went the way of the home side; the second was the exact opposite. Demons offense began to click, and they put together a 15-0 run to start the second, many of the scores coming from guard Ciaran O’ Sullivan. Demons’ offensive flourish coincided with a Moycullen scoring drought, and before long, Demons had amassed a ten-point lead of their own. A Loughnanne three-pointer finally got the Connemara men off the mark a few minutes before halftime. From there Moycullen were able to cut into the deficit, with Lyons doing his utmost to keep his side within touching distance of the visitors. After further scores from Loughnanne and Joesph Tummon, Moycullen were only three down at  the halftime whistle. 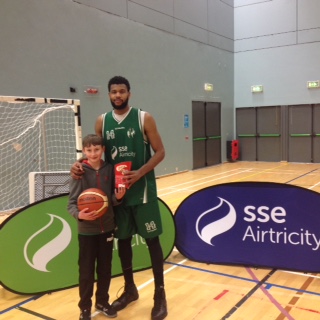 Rory O’Sullivan winner of our 14 & under free throw competition held at half time of the game. Rory is pictured here with Phillip presenting him with his prizes.

Well done Rory, looking forward to you hitting those free throws in a Superleague game soon

The teams were inseparable in the third quarter. Demons kept the pressure on, but Moycullen were able to match them. Lyons continued his man-of-the-match performance, and halfway through the third, he threw down a thunderous slam dunk which really got the crowd into the game.

Moycullen drew level, but in the dying moments of the third quarter Demons hit a jump shot to keep them 2 points up going into the fourth.

The fourth quarter may well have been one of the Superleague’s most exciting periods of the season. Both sides played with intensity- neither willing to let up on the defensive end. Lyons gave Moycullen their first lead since the start of the second. Neither team was able to hold their lead for very long, however.

A Dylan Cunningham layup gave Moycullen the narrowest of leads with just under two minutes remaining. A big block from Paul Freeman on the next possession ensured the game would go down to the wire. After a timeout, Demons threw up a quick shot that failed to hit the mark. Tummon pulled down the rebound and was immediately fouled. He went to the freethrow line and hit one of his two shots, giving Moycullen a two-point lead, and giving Demons one last shot.

With two seconds to go, UCC were able to manufacture a good scoring opportunity, but the shot didn’t fall, and Moycullen secured the rebound and the victory.