Moycullen U15 boys took on Titans in the area final last week  in the Jes Hall and came away with a 56-40 win. The boys were certainly up for the contest and hit the track running going into a 20 -12 first quarter lead. James Connaire caused Titans loads of problems hitting 10 points in the first. Titans did manage to slow the boys down somewhat in the second with Ben Kelly to the fore in a very committed performance. Paul Kelly started to find his range and the game was over as a contest midway thro’ the third as Moycullen kept the scoreboard ticking over with another 19 points. Apart from their offensive execution, what was particularly pleasing was the defensive performance limiting Titans big players  to low single digits. In the final quarter, James Wall knocked in a couple of lovely jumpers while Cormac Croke & Ryan Monaghan also made a contribution to the scoreboard. 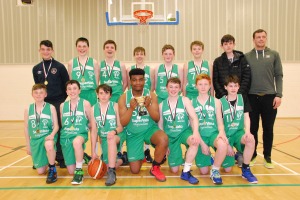 William with the U15 league trophy