SSE Airtricity Moycullen secured a hard fought win over Premier League rivals Eanna BC, In the Kingfisher gym this past Saturday.

The game also saw the debut of Moycullen’s newest American signing, Raheem Lemons. Lemons is a graduate of Ohio’s Central State University, where he was an all-conference and all-American player. 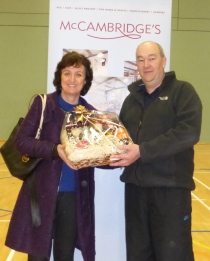 Julie O’Brien presents a McCambridge’s hamper to our raffle winner Tom O’Malley. Many thanks to McCambridge’s for their continued support of the Premier League team.

Both sides looked tentative in the early goings and both failed to find scores. It was the away side who broke the deadlock first. Moycullen struggled to find baskets, allowing Eanna to build an early 10-point lead. Worryingly for Moycullen, Eanna’s scores were coming far to easy, two offensive rebounds led to 3’s, and another couple of offensive rebounds ending in easy lay-ups. Moycullen eventually found their offense behind baskets from Lemons, Ronan O’ Sullivan and Paul Freeman. However, by that point Eanna had built a double digit-lead with the scoreboard reading 11-24. A 13 point deficit at the end of the 1st quarter while not ideal wasn’t insurmountable but the haeemoring of scores would have to stop if Moycullen were to have any chance of coming away with the win.

Moycullen looked like a different side  once the second quarter opened. A strong finish from Kyle Cunningham coupled with the foul showed that Moycullen were up for the battle. The Galway men dug in defensively and excellent ball pressure coupled with no space being given to any player led to a number of fast break scores from multiple players. Paul Freeman, James Loughnanne and Sean Candon showed their intensity on the defensive end, each forcing Eanna to commit mistakes and turnovers. Eanna were unable to single out any player for special attention as six players from Moycullen found the bottom of the net in this period. A massive alley-oop from Dylan Cunningham to Lemons followed by a stop and then a ‘3’ from Kyle Cunningham had the packed crowd rocking as Moycullen went on a 7-0 run reducing the Eanna lead to 2 points by halftime; 37-39.

John O’Sullivan from SSE Airtricity presenting Coaches Nollaig Cunningham & Gerald Lyons with a sponsorship cheque. This is the 3rd year that SSE Airtricity have been main sponsors of the PL team & the club.

It was more of the same at the start of the third quarter, with Lemons once again finding space to finish strong at the basket, followed by two great scoring drives from Loughnane. On the defensive end, the intensity continued limiting Eanna to tough shots. Candon, Dylan Cunningham and O’ Sullivan each found multiple baskets as the home supporters really got behind their side. A Personal 6-0 run by Ronan O’ Sullivan, who b ynow was playing inspired basketball, gave Moycullen their first lead of the match, much to the delight of the home faithful. Eanna had no reply, and by the end the third Moycullen were on top by a 7 point margin; 60-53.

In the fourth quarter Moycullen sought to push their lead out further. Moycullen continued to stifle the Eanna offense with Kyle Cunningham and Candon each picking up steals for their side. Both sides traded scores as the game took on a scrappier tone. For a short time it appeared that Eanna were starting to force themselves back into the encounter as Moycullen failed to convert on a handful of offenses. Ultimately, a pair of key of scores from Lemons stole the momentum away from Eanna. From that point until the final whistle Moycullen never looked back, closing the game with a 76-68 win.

A poor first quarter made Moycullen work really hard for the win but the showed great grit and determination particularly in the 2nd & 3rd quarter to turn a 13 point deficit into 7 point lead. While they did tighten up in the 4th, they hit their free-throws to see out the win. An impressive debut for new American Lemons, who finished with a double double of 16 points and 18 rebounds. The game featured one fantastic highlight reel for the Wisconsin native in the 2nd quarter and very nearly a second in the 4th. He is sure to be a fan favourite in his time with SSE Airtricity Moycullen as the season continues.

The fixture also featured a half-time game from our U11 girls team who showcased their talents in front of a packed gym.  A super job by the girls who have made big strides this year and put on a great game for the crowd.

Next up for SSE Airtricity Moycullen is an away clash with Templeogue on Saturday 23rd January.