“Time passes quickly” is a phrase often used in the context of sport….. many of the Moycullen basketball fraternity i’m sure can clearly remember the thrill of winning our first (and only previous) U13 Boys Community Games title in Mosney.  However, I suspect we would all find it hard to believe it was as far back as 2000.  None of this years team were even born when it happened,  Mosney has been replaced by Athlone and players from the 2000 team such as Michael Dowd and Cian Nihill have come and gone (hopefully to return…) through successful Superleague careers with Moycullen.  Superleague wasn’t anywhere on the Moycullen radar in 2000… winning the local league was enough of a challenge…. Time definitely does pass quickly……..

2000 being our only victory is hard to fathom when you think of all the fine basketballers that have passed through the club in the interim.  However, it just goes to show that winning a national title is never easy and a lot needs to fall into place to make it happen.  For the current team, the first piece to fall into place was probably the most important…. getting entered in the competition.  With the advent of a clearly defined basketball season and the availability of regular scheduled Galway league games (things which weren’t guaranteed in 2001), the focus has moved away a little from Community Games.  Thus, the deadline for entry nearly came and passed without Moycullen entering.  Indeed, the u13 boys were the only team from the club to enter Community Games.

Once entered, there was the small matter of getting over Maree in the Galway final.  Indeed, looking back, Maree’s development is probably a big part of the answer to the conundrum of why 2000 was our last victory.  The final was in Calasanctius and it was hard to predict in advance.  In league play, Moycullen were stronger at U13 but Maree were stronger at U12.  Community Games is played at U12 and a half and the Moycullen team was equally split between U12 and U13.  In a tight encounter, the scoring power of Paul Kelly was to prove the difference with Moycullen winning by 6.  Despite the victory, it was hard at that point to see an All Ireland in the team.  Next up were the Connacht’s and, in a reflection of the standard the basketball club operate at, the team were never challenged and eased to victory over Castlerea from Roscommon and Ballinamore from Leitrim.  A good result but still hard to see an All Ireland on the horizon.

The prospect of winning of the All Ireland really began to emerge in the seven weeks between the Connacht’s and the All Irelands.  The team trained dilligently and played a series of friendlies against the remainder of the U13 boys team (with some U14’s thrown in for good measure).  Through this period, the team established a simple mode of play focussed on upping the speed they played at and getting fast break scores before the opposition could set their defence.  Attendance was excellent and younger guys like Eanna Davoren and Rhys Plower began to really grow in confidence.  After some tough battles (and harsh lessons) from the older guys the final “friendly” game was a real indicator that maybe an All Ireland could be won.  The young guys gave went toe to toe with the U13/U14 combination, outran them up and down the court and very nearly won the game.  While Paul Kelly was still the leader of the team, Tommy McNeela was now controlling the game from the point and the rest of the guys were contributing fast break points off Paul and Tommie’s drives.  Bring on Athlone…..

The All Irelands are a bit of a step into the unknown with little info available in advance.  However, a bit of Googling goes a long way (far enough to at least find out who the opposition were….).  It painted a tough picture though…. the semi was against Donagh from Monaghan (whom we beat in last years 3rd place playoff) while the other semi saw Currow/Currans from Kerry facing Kill/Johnstown from Kildare.  Both of these had been highly impressive in their provincial campaigns with comfortable victories in every game.  The semi on Saturday proved easier than expected…. early scores from Paul Kelly, Eoghan O’Reilly and Tommie McNeela and excellent team defence saw Moycullen establish an unassailable lead and they were able to give plenty of court time to the full squad throughout the game.  Mark Heffernan and Mark Tobin put in good minutes coming off the bench and the young guys, Daniel Hackett and James McLoughlin showed great confidence when given their opportunity.  Play of the day went to Daniel Hackett for his super “and one” basket.  A comfortable victory was achieved and time to watch the second semi.  This was a thriller (that either could have won) but Kill/Johnstown edged it by a point in the end.

Sunday morning arrived and the team were ready to go with a clear game plan to deal with the Kill/Johnstown offence.  The plan worked to perfection initially with Eanna, Paul, Rhys and Daniel helping Tommie to contain Kill/Johnstown’s quick guard, limiting his chances to score while Eoghan, the two Mark’s and James rotated the job of protecting the basket.  Tommie did an excellent job and six points up early in the third quarter, all looked good.  However, Paul then picked up his third foul forcing him to the bench.  Initially, the team handled the situation well and retained their composure but with scores hard to come by, they wilted a bit, and by the end of the quarter were trailing by 4.  However with the fouls protected, Paul returned in the fourth and in a superb offensive display, drove time after time through the Kill/Johnstown defence to score as the deficit was quickly erased.  When Paul didn’t score, Tommie chipped in and, with everyone defending manfully, the team eased away to a superb 7 point victory, 31-24.  Happy days… and a long summer of effort well rewarded.

The journey home was great with the ever supportive parents more than happy to toot their horns in the cavalcade to the village.  Bonfires blazed as word had gone ahead of the victory and the game was replayed a few times in conversations over burgers and Chips in Dooley’s.  Hopefully it won’t be 2028 before the next report gets written……. and even if it is, it will be easily remembered……. 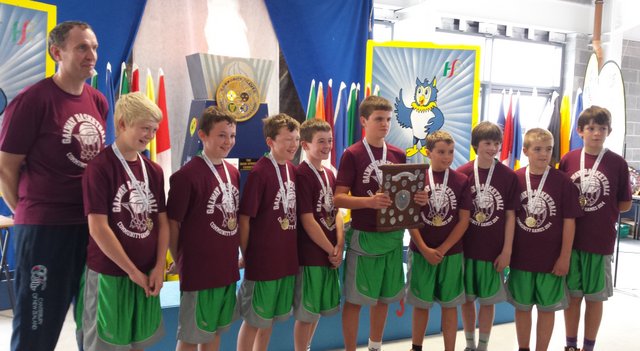