This coming weekend is the biggest in weekend of the year in Galway Juvenile basketball with the finals of most of the league competitions taking place over Saturday, Sunday and Monday. Moycullen will have teams playing in seven (7) finals. Some of these are ‘A’ finals for the title of league champion while others play in ‘B’ finals for 3rd place. Combined with our U16 Girls and U14 Boys winning their leagues and our U16 Boys finishing second in their competition this is another successful season for the club on the competitive font.

This weekend is a culmination of the activity that the multitude of teams have been involved in all season.  It’s important to remember that outside of the teams making the finals there are lots of budding basketball stars working on their skills and enjoying playing the game with coaches and managers committing time to support them. Well done to everyone for their effort. But for now it’s one last push for everyone involved and remember to get in to support a few of the teams over the weekend. 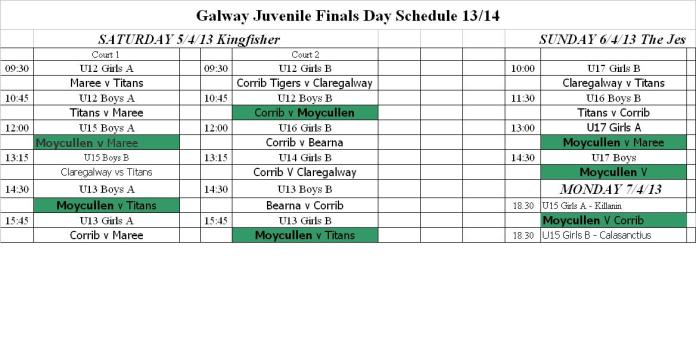