A busy weekend for the SuperLeague team draws to a conclusion when we welcome Swords Thunder to the Kingfisher on Bank Holiday Monday 29th October.

Isaiah has been in sparkling form so far averaging 23 points & 7.5 rebounds Courtesy of Joe Shaughnessy

After a cracking display against Neptune in Cork last Saturday when we had 6 players in double figures while scoring 111 points the team will be hoping to continue that great scoring while tightening up a bit more on defence this weekend.

UCD Marin  Saturday 7pm Dublin
Hopefully the lads will be back home with a win under their belts after playing UCD Marian in the National Cup 1st round on Saturday 27th. It’s as tough an assignment as the team could have asked for; UCD Marian are the reigning SuperLeague champions and have quality all over the floor with their strength and depth a real problem for all teams.

It’s a case of pick your poison with Marian, stop their fast break game and they can pick you apart with crisp passing. Close down their inside game and they have deadly outside shooter. Conor Meaney, Scott Kinnevane, Barry Drumm, Neil Baynes are outstanding Irish players with a huge amount of SuperLeague experience. And then throw in American Mike Garrow, Pole Mariusz Markowicz and Spanaird Joan Vall-IIobera and it’s an excellent outfit.

However, the team will be travelling to Dublin full of confidence after the display in Cork. Hopefully they can continue the great movement and passing on offence from the Neptune game and a little more attention to detail on defence will go a long way in helping the lads get the win on Saturday.

Swords Monday 3pm Kingfisher
Sunday is recovery day before we take to the court again on Monday at 3pm against Swords Thunder in the Kingfisher. 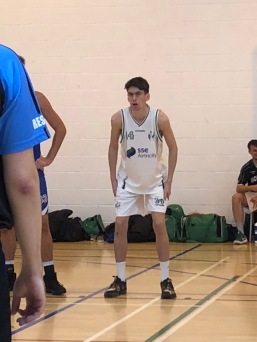 Dara Kenna who made his competitive SuperLeague debut against Neptune

Swords & Moycullen met in the pre-season Donie Greene Tournament in September but not much can be read into that game as it was early on the Sunday after 3 tough games on the previous Saturday.

While Swords are much changed from last year, their core Irish players remain from the last few seasons, with Isaac Westbrooks, Kevin Lacey, Charlie Combes & Oisin Kerlin amongst the best Irish players in the league. With three new Americans; Kyle Steward, Bobby Ahern & Elijah Mays and two new Spaniards; Guevara De La Torre & Adrian Fernandez players in the squad, they will be a real handful with scoring threats all over the court.

The teams split their games in the league last year; we won the first game in November by 10; 84-74, while in the return fixture in Dublin in February we lost out on a scoreline of 61-81, although the game was tighter than the final scores suggests. The game on Monday should be another cracker with the team hoping to get another win in the league and build on that momentum from last weekend in Cork.

Remember tip-off on Monday is 3pm.