Billy Kelly heartache for U17 Boys

Devastated! That’s how the U17 boys & their supporters felt at the final whistle of the Billy Kelly in Cork on Saturday. Moycullen had just lost a game they had looked like winning as K.C.Y.M.S. got the rub of the green in the final seconds of the game. Killorglin, down by four going into the last minute, knocked in a long three to bring the deficit back to one, fouled to get Moycullen to the line where they made one to lead by two with 15 seconds on the clock. A time out advanced the ball to halfway and with a stunning rehearsed play, Killorglin tied the game with 5 seconds to go. Moycullen tried to call a time out, were unsuccessful, inbounded, turned it over, and the referee made an extraordinary harsh foul call to give Killorglin two shots with 5 seconds left. They made the second and when Moycullen failed on the last play, this Billy Kelly was going to Kerry for the first time.
The team had given their all – Paul Kelly with 16, James Connaire 13, James Lyons 10 & Mark Convery with 8 kept the scoreboard ticking over throughout the game.

The lads had delivered all weekend – beating tournament second favourites, Templeogue in the first game by 6. They followed that up by beating Tralee, Blackwater Steelers & Limerick Celtics on Friday to move into a quarter final slot versus Ballincollig on Saturday. A brilliant display there, winning by 25+ saw them in the semis up against hot favourites, and home team, Neptune – the outstanding team at this age. The boys displayed great guts throughout winning by two after a titanic struggle.

Any all star team picked from the weekend games would have to include Mark Convery & Paul Kelly who were outstanding in every thing that they did. 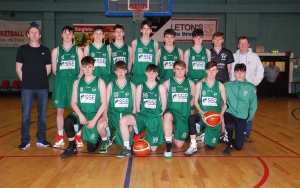