Moycullen players, Aine McDonagh & Catherine Connaire both had great performances with the Ireland U18 women team that finished a very creditable 8th in the European Championships in Sarajevo, Bosnia & Herzegovina. Ireland beat England, Estonia & Macedonia in the group stages but lost  critical game to Greece by 4 points. Nevertheless, this gave Ireland a quarter final match against the outstanding performers of the first round – Sweden. Ireland held a 14 point lead in the third but couldn’t match the intensity of the Swedes and had no answer to the depth of their bench, losing by 18 in the end. The girls then faced  Poland 15 hours later in the decider for 5/6th place and again went down by a slender margin. The last game against Germany was an absolute cracker with Ireland down by 24 point at one point before a sustained effort in the second half saw them close the gap to 2 points. The girls won that last quarter by 26-10 but just ran out of seconds.They forced the Germans into two turnovers in the last 10 seconds in search for that elusive tying basket……Aine & Catherine played in all games and this marks the third season in a row they have represented their country. They have been a credit to themselves, their coaches & the club. 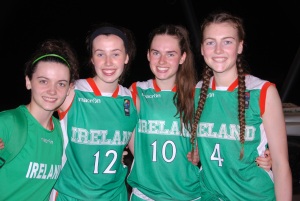