President’s Cup finalists and National League toppers, SSE Airtricity Moycullen, return to league action Saturday (Table). They take on Team Left Bank Kilkenny in Kingfisher with tip off at 5.30pm. While Kilkenny’s 3 & 5 record may suggest a home win, they have had their 3 wins on the road including a recent win against C&S Blue Demons in Cork. Led by former Moycullen favourite Puff Summers they play a fast offence-based game and are the second highest scorers in this seasons league behind Moycullen. In addition to top-scorer Puff, both Julian O’Keefe and James Butler have scored more than 100 points in the league. Moycullen will have to be at their best to secure the points. Given the recent cup success a big crowd is expected in Kingfisher for what could well be a real spectacle. 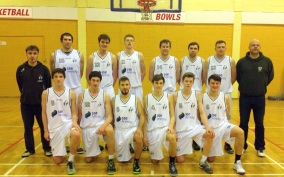 The Kilkenny photos are taken from their excellent Facebook page